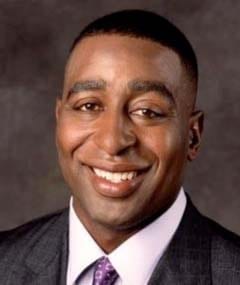 One of the most illustrious pass catchers in NFL history, former Minnesota Vikings star receiver Cris Carter is now a weekly commentator on HBO’s “Inside the NFL.” Overcoming substance abuse, addiction, and family problems, Carter established a foundation for underprivileged children, as well as the Viking Super Challenge, which challenges students to stay in school and away from drugs. But Carter believes his most significant contributions continue to be made off the field, through public speaking about drug awareness.

One of the most illustrious pass catchers in NFL history, Cris Carter, the former Minnesota Vikings star receiver, started a new chapter in his storied career by joining HBO’s “Inside the NFL” as a weekly commentator. In his rookie season, Carter earned high marks for his keen game analysis and sharp opinions.

Drafted out of Ohio State University by the Philadelphia Eagles in 1987, Carter’s first reception as a pro was a 22-yard touchdown catch. He went on to a stellar NFL career spanning 15 years, including 12 years with the Minnesota Vikings. Coupling stunning athletic ability with durability, Carter played a full 16-game slate for 13 seasons and appeared in eight consecutive Pro Bowls. In 1999, he became only the second player in NFL history to catch 1,000 passes, putting him into the history books alongside Jerry Rice. Carter, 36, ranks second on the NFL’s all-time list for total receptions (1,101) and receiving touchdowns (130). He was named to the All-Decade Team (1990) by the Pro-Football-Hall-of-Fame Selection Committee and received the 1999 NFL Man of the Year award. In dramatic fashion, he joined the Miami Dolphins in 2002, when injuries decimated their receiving corps.

In addition to his on field accomplishments, Carter has been an active member of the community. Overcoming substance abuse, addiction, and personal/family problems in his own life prompted him to establish the Carter-White Charitable Foundations for underprivileged children, as well as the Viking Super Challenge, which challenges students to stay in school and away from drugs. He also created the Cris Carter Academic Honor Roll Program that recognizes high school athletes that excel on the field and in the classroom. Carter is also a consultant to FAST, a sports training center where young athletes can play sports year round and a place professional athletes can stay in the off-season.

A member of the Board of Directors for Builders of Dreams for Youth (BODY), Carter also serves as an International Ambassador for the Starlight Foundation. In 1996, he accomplished one of his greatest personal ambitions when he became an ordained minister. He now splits his time as a consultant to FAST, a weekly commentator on HBO Sports “Inside the NFL,” the official analyst to the NFL on YahooSports.com, and coaching his son’s little league football team.

Cris brought the audience to tears and laughter throughout his presentation. He was magnetic, powerful, and dynamic in his delivery and he told his story with much passion. We have heard from many that he is the best speaker we have ever had at this luncheon.