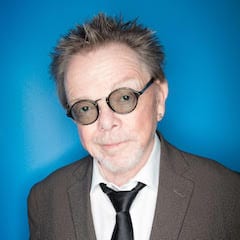 In addition to his award-winning music career, Paul is also passionate about recovery, and works tirelessly to de-stigmatize alcoholism and addiction. His career, life, and work in recovery have been chronicled in the acclaimed documentary, Paul Williams Still Alive, for which Paul wrote the critically acclaimed title track. Sober 28 years, his humorous observations of life, love, and creativity, augmented by the education and knowledge he gained through his studies and certification from UCLA as a Certified Drug Rehabilitation Counselor, has been shared in a best-selling book co-written by Tracey Jackson, entitled Gratitude and Trust: Six Affirmations That Will Change Your Life which was featured on Oprah’s Super Soul Sunday.

Paul Williams is one of the most beloved and respected music creators in the world today. A lyricist and composer who has won an Oscar Award, three Grammy Awards, two Golden Globe Awards, an Ivor Novello International Award, and earned induction into the Songwriters Hall of Fame, his songs, from “We’ve Only Just Begun,” “Rainy Days and Mondays” and “You and Me Against the World” to “An Old Fashioned Love Song,” “Let Me Be the One” and “The Rainbow Connection,” have touched millions of people for generations. As President and Chairman of the Board of the American Society of Composers, Authors and Publishers (ASCAP), he is also a leading spokesman for music creators in the digital age.

Williams’ standards have been recorded by such diverse musical icons as Elvis Presley, Frank Sinatra, Barbra Streisand, Ella Fitzgerald, Ray Charles, David Bowie, Tony Bennett, The Carpenters, Diana Ross, Luther Vandross, Willie Nelson, Gonzo and Kermit The Frog. Although Williams is widely known as an actor in dozens of films and on television, it is his musical legacy that continues to inspire. His songs and scores have received six Oscar, nine Grammy, six Golden Globe and two Emmy nominations. “The Rainbow Connection,” from the children’s classic The Muppet Movie, is one of two of Williams’ songs that grace the American Film Institute’s List of Top Movie Songs of All Time; the second, “Evergreen,” is from the award-winning Barbra Streisand/ Kris Kristofferson remake of A Star Is Born. Additional song scores include the cult favorites Phantom of the Paradise and Ishtar, as well as The Muppet Christmas Carol, Bugsy Malone, and Emmet Otter’s Jugband Christmas, the latter of which has now been adapted for the stage. Paul created the story and wrote the songs for Disney’s Emmy-nominated A Muppets Christmas: Letters To Santa and penned the music and lyrics for Garry Marshall’s theatrical sensation Happy Days. His recent work has remained wonderfully diverse, having co-written “Beyond” and “Touch” (which he also performed, receiving a Grammy as Featured Artist) on Daft Punk’s chart-topping, ‘Album of the Year’ Random Access Memories; and writing with Gustavo Santaolalla for the animated film, The Book of Life which received a World Soundtrack Award for their “Apology Song”. They are currently working on Guillermo del Toro’s stage musical adaptation of Pan’s Labyrinth.

While publicly lauded for his work as a songwriter, actor, author, and humanitarian, Paul predicts he’ll be remembered for playing Little Enos in the Smokey and the Bandit trilogy and for his lyrics to “The Love Boat” theme, although it is the lyrics from Bugsy Malone that aptly sum up his philosophy: “You give a little love and it all comes back to you; You’re gonna’ be remembered for the things that you say and do”. As a devoted husband to writer Mariana Williams and proud father, Paul considers his son Cole, and daughter Sarah, to be his best work.