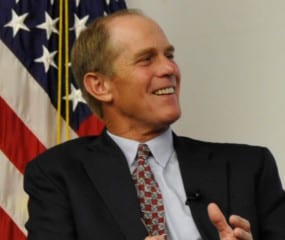 Steve has 25 years of sobriety and recovered from a dual diagnosis of both addiction and depression. He has spoken to hundreds of groups with a transparent but hopeful message of recovery. He walks audiences through his own journey to recovery in an open manner similar to his mother Betty Ford.

Beyond the Limelight: Overcoming the Struggle
Steve Ford has entertained and inspired audiences with anecdotes of how his famous family dealt with his mother’s battles with alcoholism and breast cancer and he he overcame his own struggles with the bottle. He talks about the high price he paid for bad choices involving drugs and alcohol, the early habits he formed that led to his addiction, and his road to recovery. He shares many historic photos and videos.

Steve Ford’s background in the addiction and recovery community began back in the late 1970’s when his family personally felt the impact of addiction. Steve’s mother, Betty Ford was in the middle of her own personal struggle with addiction that pulled at the entire family. The former First Lady went through an intervention led by her husband and children at a time when addiction was a closet disease. That successful intervention changed the face of addiction after his mother shared her journey of recovery, hope and transformation with the public. Mrs. Ford went on to found the Betty Ford Center which has treated thousands of individuals and families for over 30 years.

Steve also went through his own recovery form alcoholism in 1993 which deepened his personal understanding of the disease. He recovered from a dual diagnosis of both addiction and depression. He kept his sobriety quiet early on in his journey but then in the late 90’s started sharing his story publicly to help others. He walks audiences through his own journey to recovery in an open manner similar to his mother Betty Ford.

During the last 17 years Steve has shared his story of recovery and hope with thousands of people in hundreds of different venues. He has spoken to over 75,000 young people all the way from middle schools up to university settings. He has presented the human side of this disease through his talks at professional conferences, prisons, juvenile detention facilities, halfway houses and schools. He has appeared on numerous national television and radio shows openly talking about the road to recovery. Steve has helped numerous other families find hope by taking part in interventions for their own loved ones. His experience and knowledge in the addiction and recovery community is personal and comes from his own work on the frontlines of this disease.

Your ability to captivate an audience is truly an exceptional gift. We have received rave reviews from numerous donors about your presentation. You are clearly very aware of the importance of philanthropy and that donors need to be recognized. They were touched by your message and applaud your efforts to inspire others to express their compassion and concern for those around them. Thank you for helping us make the meeting a huge success.

Your vivid description of addiction as sneaky and unrelenting, as well as your use of humor, without ever making light of the seriousness of the disease, kept the more than 800 people in attendance spell bound.

You inspired our donors to support us more generously than ever before. So many of the attendees remarked to me after the event how much they enjoyed not only your unique White House and Secret Service experiences, but the honesty embedded in your personal mission through addiction, recovery and living a sober, meaningful life.